TrackingForLess: A Use Case You Can Eat: California Crabs Tracked by Helium Network

A Use Case You Can Eat: California Crabs Tracked by Helium Network

The Helium Network is a crypto-powered network of Internet hotspots, but it has saved one amateur fisherman thousands of dollars on crab pots every year.

In a typical year, Jameson Buffmire, a San Francisco-based tech executive, loses around 10 crab pots in the course of his hobby, catching the crustaceans off the California coast. Each pot costs upwards of $300. He has been trying to find a way to track them so he can work out whether they’re being removed or possibly even stolen.

"It's incredibly frustrating to lose thousands of dollars of equipment and crab," said Buffmire.

The Pacific Ocean is a pretty rough place to track an asset. "You can’t rely on mobile phones nearby, like Apple does with [its] AirTags, and even a cellular GPS tracker wouldn't have coverage more than two miles off coast," Buffmire said in an interview with CoinDesk.

So Buffmire had to get creative. In December, he turned to the Helium network—a blockchain-powered system of wireless nodes with its own cryptocurrency, HNT. He's now using Helium's Long Range Wireless Network (LoRaWAN) with a Browan Industrial Tracker.

"It's been an absolute game-changer," said Buffmire.

He said he has recovered three crab pots that were easily worth over $1,000 by using the Helium-powered trackers. "It feels magical to be able to open a phone and check the location of something so far away and in such a different environment," added Buffmire.

The trackers require LoRaWAN connectivity from Helium hotspots. Helium hotspots are small devices that plug into a regular electric outlet and tap into existing Internet service, providing long-range connectivity to IoT devices. Using a mapping app called TrackingForLess, Buffmire was able to render the GPS trackers for a small fee. He took a network tester out on a boat to test the coverage before distributing the crab pots. The coverage was impressive, said Buffmire, connecting to over six different hotspots onshore while out at sea. This was around a 40-kilometer distance.

In December, Buffmire took the crab pots out to sea, and within 12 hours, he noticed one of them was moving pretty fast.

"I pulled up the app and watched as half of my beloved crab pots were picked up and moved to the Berkeley Marina," said Buffmire. So he called the police. The San Francisco Police claimed no jurisdiction as the theft happened on water.

Instead, the Berkeley police escorted Buffmire out onto the marina to track down what had happened.

Through the tracking app, Buffmire zoomed right in on the exact boat the crab pots were now on.

"The police informed the owners of the boat that I was on the lookout for my missing crab pots, and I got a very nice call from an officer with the California Department of Fish and Wildlife," said Buffmire.

The officer said that despite Buffmire's fastidiousness with the trackers, he had not properly marked the buoys with a fishing license number, and they were in violation of a new rule—a no-flag restriction to protect migratory whales.

Instead of writing a citation for the lack of licensing, the officer was more interested in how he had found Buffmire in the first place, according to Buffmire. It was the tracking device, Buffmire responded.

They agreed to meet in San Francisco to drop off the seized equipment.

The officer was late, "so I called to see where he was," Buffmire said. "While leaving a voicemail, I realized I could just look up where he was."

The officer and his staff were almost at the Farallon Islands, about 28 miles west of San Francisco in the open ocean.

Buffmire said they managed to meet up in the end and, the officer encouraged him to make the crab-pot-tracker-buoy-on-the-helium-network a real product.

"That hasn’t happened quite yet, but I've enjoyed a tremendous amount of crab," Buffmire said.

In the end, Buffmire says, he didn't get a citation.

"It was a really cool experience," he recalled. "No citation, and a friendly officer also interested in the technology. It was quite cordial, in fact. He helped haul the pots back to my car, and showed me their (awesome) boat."

Get your Helium Tracker now!

Update on the State of the Electronic Components Supply Chain 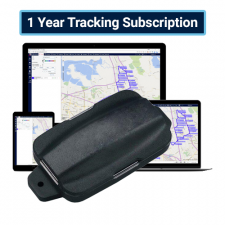 TrackingForLess: A Use Case You Can Eat: California Crabs Tracked by Helium Network April 21, 2022